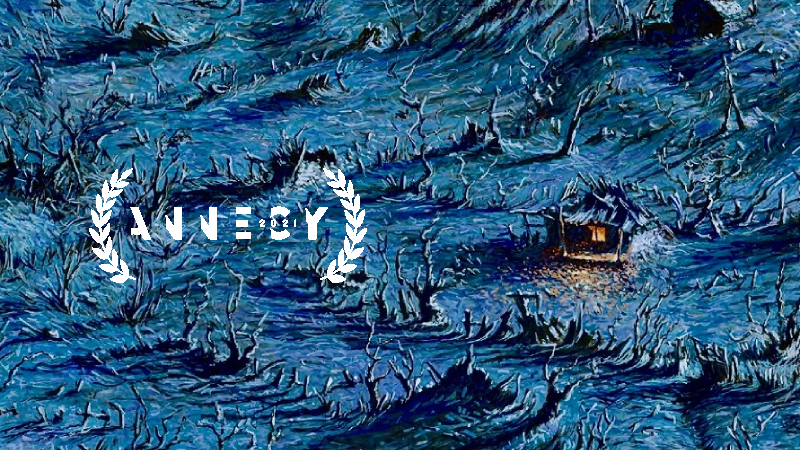 Mariam Kapanadze’s animation ABANDONED VILLAGE, one of our latest projects, was for Annecy International Animated Film Festival 2021. We worked on this animation’s sound design and enjoyed our collaboration with Mariam Kapanadze and producer Mariam Kandelaki.

The Story Behind the Animation

ABANDONED VILLAGE is one of the unique Georgian animations. It presents only one image of decaying rural settlement, familiar to all Georgians, where changing lights and colors in the image create motion. The visual part of the film contains no narrative itself; it has neither narrator nor voice actors that can traditionally tell the story. Instead, the village’s sounds, recorded and created for the film by sound designer Beso Kacharava describes its history.

Spending childhood years in villages is a long-standing tradition in Georgia, so while the villages themselves may be disappearing, their sounds encode in every Georgian’s memory. To construct an authentic Georgian sound landscape, Beso Kacharava decided to record most of the film’s ambiance in Georgian villages and rely on sound libraries as little as possible. Beso and director Mariam Kapanadze wanted a sound landscape that would feel familiar to Georgian audiences, despite which region they come from. Each viewer would hear echoes of their memories in it.

Animation ABANDONED VILLAGE has two separate lines of sound landscape – sounds that are audible in the moment of observing and sounds that once belonged to the village and now haunt its ruins from the past. But in the final mix, they blend, translating the place’s effect into the sound. To create a sense of separation between sounds, Beso Kacharava recorded them from various distances with Sony PCM D100. Distance in space expresses the length in time. Present sounds concentrate in the middle, they come from actual decaying buildings on the screen, but sounds of the past are more distant, echoing from the landscape’s unseen edges.

The Cycle of The Day

Another challenge for sound design was expressing the cycle of the day. In over 14 minutes, the animated film ABANDONED VILLAGE goes from dawn to midnight; lighting constantly changes and requires fast shifts in ambiance. The majority of sounds come from village Kvishkheti, where Beso Kacharava recorded every part of the day. These sounds also communicate the life cycle of the village. We can hear more vibrant sounds in the morning; they’re active, dynamic, and full of life. Afternoon sounds gradually worn out as if they feel tired from working under the sun. In the evening, they’re fainter, slowed down, and relaxed, and finally, at night, they slowly go to sleep, only the calming crackling of the fireplace remaining.

Director Mariam Kapanadze explains the reasoning behind the creative decisions of the animation: “In the ‘brighter’ episodes of the film, sound tries to revive the village’s once-vibrant life; noises of playing children and working parents express them. We cannot see their actions, but we can hear them. This is the struggle with life, bond with the unconscious that humans can connect to with sound. In the ‘darker’ episodes, the village returns to the tragic reality of the present and struggles with death. Lively sounds of the past are gone, and only natural sounds of the abandoned village remain.”

“Sound for me means the possibility to have constant communication with the memory and with the unconscious. It can find well-hidden emotions in a person. That’s why I think experimental sound design helped this film express its main message more dramatically. ABANDONED VILLAGE is the meditation; it requires deep thinking on the viewers part, and thanks to this sound design, the audience gets the chance to be the participant of the movie, as well as its observant.”

Mariam Kapanadze and producer Mariam Kandelaki first presented the film in Japan at The Hokkaido International Animated Film Festival and received a warm reception. Annecy International is the second and biggest festival where ABANDONED VILLAGE will be screened. We want to congratulate the director, producer, and the entire crew and wish them a successful screening.